Devi Maa Saraswati (सरस्वती) is the Hindu goddess (Devi) of knowledge, music, art, wisdom, and learning. Saraswati is one of the the trinity (Tridevi) – Devi Saraswati, Devi Lakshmi, and Devi Parvati. This Trinity (Tridevi)-  three forms help the trinity of Brahma, Vishnu, and Shiva to create, maintain, and regenerate the Universe, respectively.(ऋग्वेद) Rigveda is the – earliest known source which mentions – Saraswati as a goddess.She has remained significant as a goddess from the ancient times through modern times of our Hindu Religion.We also celebrate – Vasant Panchami. Vasant panchami is the fifth day of spring which is also known as Saraswati Jayanti. This day as per Hinduism – we celebrate by helping young children learn how to write the alphabet and various other traditional forms. (Ref)

This Saraswati Mantra has lots of Benefits

Other Powerful and Easy Saraswati Mantra Must Reads after Saraswati Mantras- 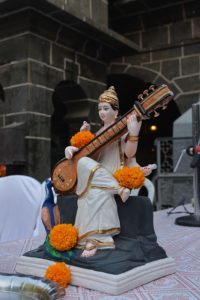