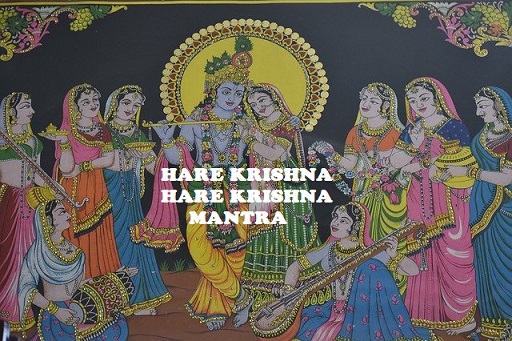 HARE KRISHNA HARE KRISHNA (हरे कृष्णा हरे कृष्णा मंत्र ), Learn, Read and Download Hare Krishna Mantra from this page.  Chanting of mantra – “Hare Krishna Hare Krishna Krishna Krishna Hare Hare, Hare Ram, Hare Ram, Ram Ram Hare Hare” will connect you with lord Vishnu’s Avatars – Ram and Krishna. Vedic Sanskrit Maha Mantra – is actually a Vaishnav Mantra which was mentioned in Kali Santarana Upanishad. It became popular from the “Chaitanya Mahaprabhu’s” movement in the 15th century. Therefore, This time – Hare Krishna Movement became hugely popular. Above all, Devotees are great believers of Lord Krishna- God who is not only respected in Hinduism but today in almost all countries and all cultures. Some respect it as – Hare Krishna religion.

History and Hindi translation of – Hare Krishna Mantra in Hindi

Meanings and Importance, What is the belief of Hare Krishna?

As per beliefs and understanding, this mantra will have multiple interpretations from Sanskrit to Hindi or English and therefore, all forms can be considered correct like –

a) For example, One meaning of “Hare” will be – Hari or Vishnu, another meaning can be – Harā- a name of Rādhā, Krishna’s eternal consort or (Krishna’s Shakti).

b) A. C. Bhaktivedanta Swami Prabhupada defines Harā as “the energy/shakti of Supreme Personality of Godhead” while Krishna and Rama refer to Supreme Godhead Himself, meaning “He who is All-Attractive” and “He who is the Source of All Pleasure”.

c) In this Mantra- few believe that “Rama” in “Hare Rama” means “Radharamana” or the beloved of Radha (another name for Kṛṣṇa). While Another popular interpretation of Rāma is well known Vishnu Avtar of “Ramayan era (Kaal)” – Rama. The third interpretation of  “Rama” can also be Balarama.

Hare Krishna Hare Krishna is a Vaishnav Mantra dedicated to Lord Krishna which is very popular in India and abroad. Therefore, All Krishna bhakti chant “Hare Krishna Mantra” every day with loud music. Above all, It’s a great relaxing dhun also which gives you relief from all your tentions. Just chant – Hare Krishna, Hare Krishna, Krishna Krishna Hare Hare, Hare Ram Hare Ram, Rama Rama Hare Hare and feel light. Honestly makes you feel connected to “Krishna” and if 100% devotion is there – you feel all the miracles of Krishna Bhakti. Krishna is there for his devotees. Devotees have various forms like a normal mantra, a Dhun, a song (gaan) and they chant it with music or without music, slowly or loudly as per their wish.

Who is Lord Krishna?

Krishna is God who is worshipped as the reincarnation of Lord Vishnu. He was Lord Vishnu’s 8th Avatar. Lord Krishna gave us the way of life – Geeta Upadesh or Geeta darshan. Krishna has preached our compassion and love. As per Hinduism, he is also called as “Banke Bihari”, “Shyam” – as his skin was dark-colored.

Beautiful Images of Lord Krishna (You will not find elsewhere)

Other detailed Mantras and Mythological articles for 2020 as per Hinduism-

All images belong to the temple are trust is the owner of the pics, we have only collated them for information and knowledge purpose.